As the government of China continues its crackdown on civil society actors, especially those who have publicly endorsed or claimed membership in the New Citizen’s Movement, human rights activists gathered in Hong Kong to do something many like minded Chinese citizens are forbidden from doing within the Chinese mainland under the 1989 Law on Assemblies, Processions, and Demonstrations: engage in collective action to express their grievances. A small coalition of rights groups from Hong Kong, including the Chinese Human Rights Lawyers Concern Group, and the Hong Kong Alliance in Support of Patriotic Democratic Movements in China, organized the demonstration for a few days before the Chinese Mid Autumn Festival.

Among the demands of the small procession were for the immediate release of all arbitrarily detained civil society actors that have been arrested for their participation in the New Citizen’s Movement. Prominent names included Liu Xiaobo (刘晓波), Xu Zhiyong (许志永), and Guo Feixiong (郭飞雄). These high profile arrests are arguably part of the new administration’s rampant crackdown on civil society and dissent. The goals of these crackdowns have been discussed extensively and convincing explanations are that they are part of a symbolic campaign to forestall actions by reform minded elements within the party and to demonstrate to the broader society that deviation and dissent of party dogma will not be tolerated. It is part of the logic of the totalizing social institution of the CCP. “It’s a thought-out measure that is really against this movement, and not just Xu personally,” explains Eva Pills in an article by Benjamin Carlson. Other members of the so called movement to have been detained or arrested include writers and netizens; since August 20 more than 400 such individuals have been arbitrarily detained.

This wave of anti-civil society pressure by the Central Government roughly coincides with the Universal Periodic Review on China and China’s bid for the UN Human Rights Council. China’s session within the UPR is scheduled for Tuesday 22 October at 9:00am and the final election for their membership to the HRC will take place on November 12. For a full overview of the relevant stakeholder reports on China’s human rights situation going into the UPR see here. China’s respect for the international community and the United Nations is often lambasted by members of the United States congress, although the US has a spotty record as well, but the CCP’s trepidation at civil society freedom, especially the freedom to participate in the drafting of China’s National Human Rights Country Reports or to demand transparency in the process demonstrates a deeper concern to maintain appearances of adhering to certain international norms. That is, the government wants to engage with the international community on human rights grounds but only when they can severely control the conversation in their favor. Admittedly, this is an unfortunately common practice for many powerful states whose domestic and foreign policies still rotate around a realist worldview.

Silencing these actors is part of state policy, demonstrated in the Summer’s leaked Central Party Circular colloquially known as the ‘Seven Don’t Mentions:’ (1) Universal Values, (2) Freedom of Speech, (3) Civil Society, (4) Civil Rights, (5) The Historical Errors of the CCP, (6) Official Bourgeoisie, and (7) Judicial Independence. This list provides a convenient official government document with which to highlight the brazen hypocrisy of China’s bid to the Human Rights Council. The opening lines of their official announcement read, “The Chinese Government respects the principle of the universality of human rights and has made unremitting efforts for the promotion of the human rights and fundamental freedoms of the Chinese people.” Unfortunately, exposing irony and falsehood is insufficient to release innocent citizens and human rights defenders from arbitrary detention but the second claim of this small demonstration in Hong Kong was certainly to call attention to the falsehood of China’s bid and qualifications for entry to the human rights council. It will be the responsibility of the international community to stand in solidarity with domestic and international Chinese activists, especially those whose fundamental and personal freedoms have been arbitrarily withheld.

The demonstration had a small turnout and lasted for only about 20 minutes, enough time to march across the street and into the entrance of the Hong Kong government offices where the group encamped just long enough to read out from prepared remarks before dissembling. Hong Kong residents perhaps have grown apathetic to collective action; the frequency of protests, demonstrations, sit-ins, and other forms of public resistance have devalued the potential impact of certain sustained tactics of resistance. One might make similar criticisms of collective action even in the worlds purportedly democratic states. What is sometimes neglected from such discussions however is how valued the right to assembly and association is in places where it is severely restricted. While a small group of activists gathering for 20 minutes in downtown Hong Kong to express grievances in front of government offices is not a newsworthy story, it should be appreciated that Hong Kong allows such rights to its citizens to demonstrate for like minded Chinese citizens, some only an hour away by train, who are denied this right and detained and arrested for even less. While the CCP is arguably engaged in waging a symbolic war to discourage further mobilization one might wonder if they may not end up losing that war to mounting symbolic insurgency. 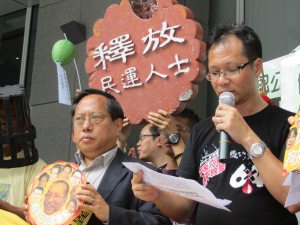